So, Yesterday I went to the In-Laws house and was surprised at what I was given, Made to close my eyes and hear my Mother-in Law ask the Missus "Do you think He'll like these?"
To my surprise I was handed a large carrier bag full of 1:76 and 1:72 soft plastic soldiers, Ancient Britons, Prussian Landwehr, ACW and best of all loads of Airfix and Esci WW2, so last night was  spent sorting the wheat from the chaff (or the WW2 from the others)
So far I have sorted the colours out into piles and will sub categorize from there, a daunting task as many identical bits appear in different colours.

The WW2 sorted by colour - 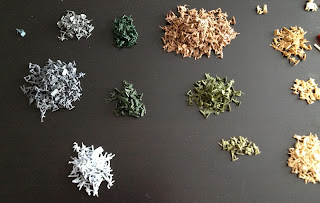 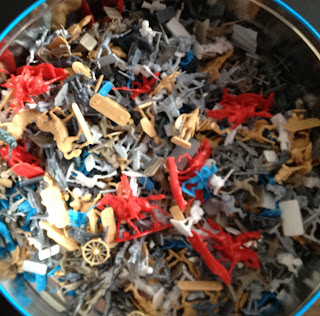 Something to do while listening to Audio Dramas then, I'll further update this post when I work out what is there but as for now I can see - DAK, Italian Mountain Troops, British in Burma, U.S. Infantry, U.K, U.S. and German Paratroops, Japanese and a few 8th Army

Hope to see you again soon