I just thought that I'd post an image of a side project I'm working on, Weird World War 2, Here is a test sculpt of some Russian Zombies 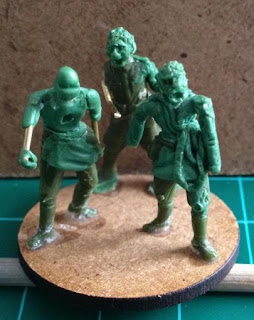 A bit poor at the moment, but they should turn out OK, German Zombies are available from Elhiem and CP Miniatures but no other nations.
They are sculpted on a base of Zvezda Russian Infantry because I had a large number of prone figures left over after building three boxes, I mixed and matched the legs to give a shambolic gait and worked from there, the heads of the donor minis have found their way onto PSC bodies as the PSC heads are way too big for my tastes so I had to sculpt new heads on the Zombies, a daunting task when a head is only 3mm from chin to crown.